One might think the phenomenon of “statue building” is an outdated habit, yet the reverse is true, it has never been so much alive as today. More than half of the tallest statues per country have been built in the past 20 years and 90% within the past 100 years. Modern building technology facilitates large scale human body construction in the same way as it stimulates super tall high rise buildings, which paradoxically enough, turn more and more sculptural.

To erect a gigantic statue asks not only for a lot of money but most importantly a good name and a good reason; for example a political, as in the case of the “Statue of Unity”, world’s largest statue, currently under construction in India. The 182 meter high  structure, which honours Sardar Vallabhbhai Patel (known as the “Iron Man of India”), the country’s first home minister and one of the founding fathers of the Republic of India, is a pet project of Narendra Modi, opposition leader and chief minister of the western Indian state of Gujarat.

The total cost is estimated at about $400 million, accumulated through public funds and private donations in the form of donating scraps of metal and metal tools. The melted-down metal will be turned into XXXL Mr. Patel with the help of Turner Construction, the US-based company that built the world’s tallest building, the Burj Khalifa in Dubai.

While investors expect that a building pay’s back the bill and hopefully large profits, investors in statue’s start out as debtors who seek to clear an intangible bill by erecting a statue. Beyond the opposite system of revenues, a very contemporary architecture discussion is buried in G.W.F. Hegel’s explanation of the difference between sculpture and architecture through their opposite means. While a statue or sculpture carries its meaning in itself, architecture presupposes an external purpose (a house for gods, images of the gods, inhabitants, etc.)[1].

Consequently, the transition from sculpture to architecture can be found in the emphasis on the symbolic or the practical. In the case of statues, practicalities as for example openings (windows) are subordinated to its function as a symbol and find their place mostly in natural openings like the mouth, the nose or more appropriate places like the eyes. Contemporary, large scale statues are hollow and look in their uncovered, un-dressed state extremely familiar to buildings. Looking at contemporary examples like the statue “Great Helmsman” depicting the young Mao in Hunan (China), it seems that we reached a point at which only the final decision, about which dress to wear, distinguishes statues from buildings. 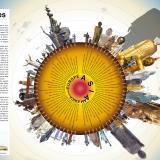