How language atomized our planet

Word creators are potential separators. Each newly created word or word combination can potentially splinter the globe and if one listens carefully to the daily usage of language, one discovers a galaxy of wor(l)ds which highlights the gap between us and “the others”. Third World, Arab World and Western World are the three largest planets of this linguistic system. Around each of these wor(l)ds, satellites circumvent with their own interest in its specific nature. The Third World for example is circumvented by the enormous satellite “The world of the NGO” which is (according to Google entries) larger than the entire “Christian World”.
The size of the seven most commonly used wor(l)ds in the illustration correspond with the amount of Google entries as the parameter for the frequency of its usage. The member states of each world got defined by parameters like religion, income or simply the general public opinion like in the case of the Third World. 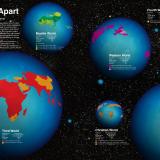