With a multitude of 191 countries (UN members) the political world seems to be complex but with currently 207 members of the FIFA (Fédération Internationale de Football Association), the world of soccer appears to be even more fragmented. Yet if one looks at this soccer-planet with the eyes of an economist, it presents itself much simpler given that the most powerful teams with a valid chance to win this years Soccer World Cup can be subsumed into a hand full of sport brands.
Starting on 9th of June, the World Cup in Germany is not only world’s biggest single sports event it is also the biggest branding opportunity for sponsors. 28 billion spectators will watch the event, and 79% of the world population will watch at least one match for more than 30 minutes.
The final of the Soccer World Cup 2006 was played between Puma (Italy) and Adidas (France), a fight between two German brothers that climaxed in Zinedine Zidane's head-bunch. 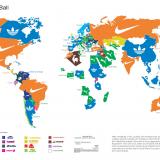