Realizing the world’s most expensive building is a dubious achievement. Whereas most architectural schemes are appreciated for qualities such as space, shape, composition and/or materialization, the highest-priced building stands out solely for the size of the investment that went into a single project.

Nowadays, to build expensively is linked less to height (Burj Khalifa, the world’s tallest building, is number 18 in terms of cost) than to a willingness to splurge – or to the prospects for raking in large revenues. The return of investment is secured for Singapore‘s Marina Bay Sands, which, with a budget of US$6 billion, is the world’s most expensive building. The resort’s casino made a gross gaming revenue of $3 billion in 2011, an amount equal to almost 50 per cent of the total gaming win for the Las Vegas Strip* and to half the building’s construction costs. Accumulation of assets apparently pays off even in times of financial crisis, which can’t be as ‘global’ as suggested since 12 of the top 20 premium-priced buildings opened after 2008.

It is unlikely that architects who design such buildings participate in the Occupy movement, as their clients head major corporations with the funds to finance whatever they have in mind. The people these architects work for ought to think twice, however, because what they get for their money is often not the most convincing architecture the world has to offer. There seems to be a strange disconnect between the sum invested and matters like proportion and shape. Of all the super-expensive buildings on the list, the oldest (I.M. Pei’s Bank of China Tower, which opened in 1990) seems to be the most respectable piece of architecture. Unsurprisingly, it was built at a time when investors were not particularly proud of exorbitant expenditures. 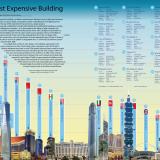