In 1986 there were 159 countries in the United Nations, today there are 191, thanks mainly to the breakup of federations in Europe plus the adhesion of microstates like Liechtenstein, Micronesia and Tuvalu. Yet, worldwide there are more than 200 unrecognized regions and people which carry the seed of separation from their current nation and all of them are more or less possible candidates for becoming a new nation-state. Similar to the way how our society is individualizing at a rapid speed, people tend to do the same by seeking their hope in total or at least partly independence in economic, political and cultural terms. 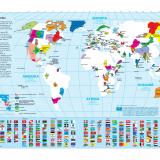