Las Vegas was founded on May 15, 1905, when 110 acres of desert were auctioned off in a single day. In the following 20 years the city essentially thrived because of the railroad. In 1931, three events occurred in the State of Nevada that would forever change the face of Las Vegas: gambling was legalized, divorce laws were liberalized and the construction of Hoover Dam started. What followed was the fastest building and population boom a city faced in the 20th century.
Las Vegas success is based on its ability for a continuous face-lift. The first decades of hotel-casino design were dominated by a ‘homegrown’ ranch style, which was abandoned for the resorts in the 50´s and that again was replaced by the megaresorts in the 90’s. This latest transformation altered the appearance of Las Vegas radically from a ‘city of signs’ to a ‘city of symbols’.

Las Vegas is impatient. While the average European city faced 2000 violent years to develop from a roman camp to a modern city, in Las Vegas a similar paradigm-shift took place in only few - remarkably peaceful - decades. This crash course through world history provided Las Vegas with the finest collection of copies from the most fascinating architecture of western culture. Only super-perfect copies of internationally proven highlights are accepted while originals are doomed to fail, like the Guggenheim museum designed by renown Dutch architecture firm OMA that had to close its doors just after 15 months.
The copies astonishing level of reality, free access, and convenient juxtaposition combined with cheap inland flights made Las Vegas a world sight seeing capital for many Americans which count for 93% of its visitors. To enjoy Venice, Luxor, Paris and New York in one afternoon provides a unique experience for the 34,0 million (2004) tourists that visit Las Vegas.
The facilities eventually built for tourists and gamblers turn out to be equally attractive for business people and the 2,0 million residents of the fastest growing city in the western world. This fact remained not unrecognized and the newest mega project of Las Vegas, the $4,0 billion “Project City Center” (ready in 2007) by MGM is actively promoting their development as business and residential and just in second place a gaming paradise.
This development might ring in a new era and finally Las Vegas might be recognized as real city.

MGM Mirage, the No. 1 U.S. casino company, unveiled plans for a $4 billion project:
“…we certainly could have come up with a spectacular casino-hotel. But, the truth is, Las Vegas is ready for so much more. As the city eclipses two million residents on its way to passing three million by the end of the decade, and with land prices on the Strip soaring, it has become clear that there is a much better and higher use for this location.”
MGM Mirage 2004 annual report 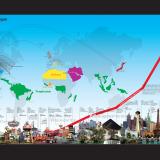