The City, the Automobile, and the Residents

This book summarizes the results of a research studio at the Strelka Institute for Architecture, Media, and Design in the spring of 2014. The primary focus of the studio and subsequently this book is to discover and explicitly show the intrinsic relationship between people, the car, and the city of Moscow. The newly gained insights are reinterpreted as alternative, Moscow specific, realities.

The most striking finding exposes the car infrastructure as a magnifier of the struggle between the individual and the collective, the unplanned and the planned, the controlled and the controller. To drivers, the car seems to be a kind of “freedom-machine”, which enables people to accelerate their liberty and power. This intoxicating mixture provides a choice between attack and escape: attack and escape the law, the standards, and the city.

In a city like Moscow, which is inhabited by people with an extreme desire for personal freedom and ruled with extreme political power, the clash between individual freedom and the collective power becomes highly visible.

Nothing changed the modern city as drastically as the arrival of the car. In fact, with the introduction of the car to the city, the modern city was born. Compared to other cities, this arrival happened in Moscow with a huge delay. Yet the city caught up within a decade and Moscow’s current car ownership rate is on the same level as Paris.

Today, traffic jams are the most visible signs of Moscow’s successful mass auto-mobilization. The explosive growth of road-related services and the high social status of car ownership underpin its immense economic and cultural impact.

Le Corbusier loved to place cars in front of his buildings when they were being photographed to emphasize his statement that buildings are machines for living. Today, architects have trouble getting rid of all the cars in front of their buildings to take decent pictures of their masterpieces. Cars have shifted from being a luxury good to being a single commodity and their usage shifted from the excitement of driving to the normalcy of routine. Looking for a parking space, being stuck in a traffic jam, and refilling the gas tank are among the most mundane happenings in the world for car users.

Despite the delays and inconvenience of Moscow’s mind-boggling traffic jams, car ownership enjoys a high status unparalleled in any other country. There is something indescribable about the ability to accelerate, something beyond the technical specifications, that makes people feel boundless freedom. Already the bicycle, as little as its acceleration might be, instigated a feeling of liberation and was recognized by 19th-century feminists and suffragists as a "freedom machine" for women. American Susan B. Anthony said in a New York World interview on February 2, 1896: "I think it has done more to emancipate woman than any one thing in the world. I rejoice every time I see a woman ride by on a wheel. It gives her a feeling of self-reliance and independence the moment she takes her seat; and away she goes, the picture of untrammeled womanhood.”

The impact of the introduction of the car therefore cannot be limited to urban design or economics; the car has to be recognized as an important element in the national democratization process. Though traffic jams dampen the feelings of joy and magnitude of freedom, Moscow experienced this democratization process rather late and the memory is still strong of times before individual mobility and individual freedom. Muscovites enjoy the freedom to work in the city and live in the countryside, to go on vacation wherever they want, and to shop on the other side of the city.

The car seems to not only accelerate people but also to accelerate changes throughout the city.  It forces local politicians to plan, forces entrepreneurs to address traffic flows, and forces drivers to organize with each other and against each other.

Today the relationship between car, Moscow, and its citizens is in a state of transition, perhaps on the brink of crisis. We are at a point where personal freedom gets restricted by the individual freedom of others and sometimes even by the state. According to Andrei Sharonov, deputy mayor of Moscow, “The city’s current road plan was laid out 50 to 60 years ago and was based on car ownership of three vehicles per 100 people. Car usage has grown rapidly in Moscow and now stands at 38 vehicles per 100 people.”

With the motorization of the society, car-related functions start to appear throughout the city. This reinforces and therefore stimulates the usage of the car. Yet Moscow’s specific political and cultural landscape will prevent development that simply imitates other European cities; most likely, Moscow will find its own Moscow-specific expressions.

In order achieve mayor Sobyanin’s ambition for Moscow to really be a metropolis and a world-class city that would be comparable to London or Paris, one needs to work within the Russian-specific context. This currently entails a situation where night transport is served predominantly by illegal taxis, where roads used by the president are in better shape than other roads, and where most of the cheap labor is done by unregistered immigrants who live in former automobile garages. Asymmetry is part of the daily routine, since the car is a mobile private space within the public domain; the larger the differences within a society, the higher the degree of asymmetry. In a city like Moscow, where the poor and the rich are living extremely separated and different lives, streets and highways are spaces of confrontation where these different lifestyles might collide. The powerful are confronted with the weak, the rich with the poor, and the fast with the slow.

A studio road trip to Kazan unveiled the nature of Moscow’s island condition in road infrastructure. A few kilometers away from the MKAD, Moscow’s largest urban ring road and municipal border, high-quality asphalt quickly ends and the road becomes perforated by potholes. Officially and in common language, these roads are considered to be ‘highways’; compared to international standards, one would simply call them ‘roads’. Traffic lights and pedestrian crossings are frequent, speed restrictions occur every 10-15km due to the road passing through a village, and separated freeways of more than one lane per direction are virtually non-existent. One could say that Russia will catch up, will develop a highway system of international standard in due time. Yet there is also the possibility that Russia deliberately does not work on its road system and is planning through negligence. Bad roads in the outskirts keep Moscow rather compact and prevent large scale suburbanization, weekend visits are reduced to the minimum, and civil mobility in general is naturally restricted.

Book released by the Strelka Institute for Media, Architecture and Design, Moscow. 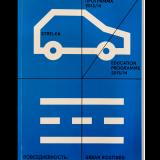