Today, organized crime is foremost an urban phenomenon. Only the pirates of the Indian Ocean are a reminder of the times of highwaymen and bandit bands. Yet they are relatively small in numbers and revenues compared to international operating clans like the Cosa Nostra or the Medellin Cartel. One could state that these pirates are in all respects ‘old school’. With the end of the Cold War and the rise of a “new world order”, criminal organizations started to cooperate like multinational organizations. Today a group like Cosa Nostra is known to collaborate with the Irish Mob, the Japanese Yakuza and the Russian Mafia (allegedly world’s largest organized crime group; ~500.000 members worldwide).

Success seems to be on their side. A recent report proves that Italy’s Mafia is adapting well to the economic crisis, boosting output but cutting labor costs and benefiting from the credit crunch in the banking sector. While Italy’s gross domestic product shrank by 5% last year, organized crime managed to increase its turnover by almost 4% to €135 billion Euros - 6% of Italy's GDP. The mafia is doing so well during the economic crisis because its criminal enterprises are based on real money. Moreover, the goods their economy is thriving on, are tangible products. After drug trafficking, the mafia’s main source of income, is its involvement in housing construction, which accounts for 37.5 percent of its profits.

The advantage of organized crime groups is that they don’t deal with illusions. The disadvantage is that one can’t negotiate; otherwise they make you ‘an offer which you cannot resist’. 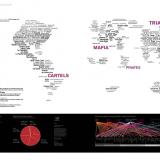