The Image of Architecture

Although architecture itself was a prime source of information during the Middle Ages*, its position has become increasingly marginalized down through the years, owing to the rapid growth of newer sources of information that also feature architecture from time to time. As a result, we find ourselves in a paradoxical situation in which we get most of our knowledge about architecture from media such as internet, magazines, books, TV and exhibitions. If you still view architecture itself as a source of information, however, you understand that realizing a building is only a small part of an architect’s job. The majority of the work is about getting enough media coverage to communicate the designer’s body of ideas. Despite strong competition from digital media, paper magazines still play a crucial role in creating a public image of architecture. Many architects feel that having their designs published is just as important – and perhaps even more so – than realizing the buildings involved.

Some 100 years ago, architecture magazines highlighted every aspect of the profession. They served as platforms for the exchange of information among multiple interest groups. Architects, contractors, property developers and suppliers all read the same magazines. Today’s media circus is fragmented to the extreme. The big newcomers try to ‘capture a bit of everything’ in flashy ‘easy to read’ architecture glossies. The style mimics that of royalty magazines, with quirky shots of beautifully dressed buildings accompanied by texts that often spread rumours about the (totally irrelevant) whys and wherefores that went into ‘digging the dirt’.

What is true of all architecture magazines is that leading figures in the industry – some of whom have even founded such publications – have retreated from content creation entirely. It is as unlikely to find a clever piece by Paris Hilton in a glamour glossy as it is to discover an intelligent article in an architecture magazine in which a leading architect writes about his or her work. But interviews are frequent. Architects save time by answering questions. After all, writing can be tedious, and the nature of an interview provides a way out of difficult questions. Why explain your building when you’d rather talk about something less complicated? Interestingly, the lack of information does no harm. In many cases, it even contributes to the creation of a myth, increases the value of the building and raises the virtual value of the designer in the bargain.

* In 1350 AD, architecture was the principle source of information throughout Western Europe The distinction between architecture and media did not exist. Terence Rilley, lecture at the ‘Berlage Institute’ 17 March 2005 published in Hunch, the Berlage Insitute report nr. 10 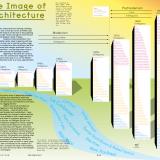