While the European Union makes a huge effort to discover a common denominator of the European Culture, international operating companies are currently defining it through cheapness. Spoiled throughout the fat years after the war, Europeans got used to chic clothes, good food and two times vacation a year. Cuts in the social welfare throughout the 1990´s made it more and more difficult for the huge European middleclass to sustain its standard. The system had to adapt.
The first check in for an easyJet flight ten years ago, on the 18th of October 1995 could be seen as the start sign for the ultimate triumph of cheapness. Ever since than Europe grew together at an enormous speed. From Hammerfest to Palermo we eat at the same IKEA table our noodles from Aldi, read the daily news in the Metro and travel with easyJet cheaply throughout Europe. 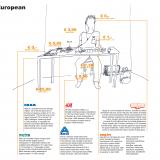