Hollandse Brug design selected for the first round

The project introduces itself as natural reed which grows along the highway. The reed grows higher and higher and slowly starts to take on super-natural proportions until it determines the entire horizon. Drivers consider themselves as ants which crawl in an enormous forest of reed. The super-natural reed landscape vanishes on the other side of the bridge as subtle as it started.

The Hollandse Brug (Holland Bridge) is the foremost connection to Almere the 30 year old new-town to the north-east of Amsterdam. Since Almere is growing at an enormous speed and commuter traffic is only rising, the existing bridge needs to be doubled.

The competition brief asked how to connect the ‘old land’ with the new land of Almere, a polder created some 60 years ago. Another precondition was that the existing highway bridge has to remain while a bridge with the same size needs to be added.

The design is characterized by aluminum poles as artificial reed with vertical wind mills at their top. These artificial reed poles are ‘planted’ in real reed-marshland which is functioning as helophyte filter that cleans the surface water of the highway. The electricity produced by the artificial reed can be used for enlighten the highway by night and pumping fresh water through the helophyte filter.
Up-scaling the reed creates a shrinking effect on the existing bridge construction. Cars and people seem to be ants crawling over to the other side. The reed on the bridge connects on both sides to the existing reed belt and naturally connects the two pieces of land. 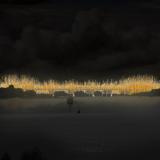 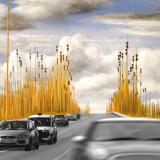 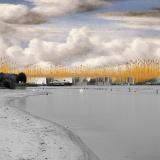 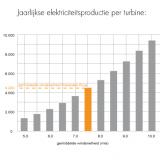