Living in the age of Wi-Fi, we float on an illusion of wireless communication, yet over 95 per cent of international communication is routed via submarine fibre optic cables. Data and voice transfer over such cables is not only cheaper but also much quicker than satellite transmission.

The first intercontinental communication occurred on 16 August 16 1858, the day Queen Victoria of England and President James Buchanan of the United States exchanged telegraphic messages through a transatlantic cable that covered a distance of 3,122 km. They had a delay of eight minutes, but data communication today is almost real time, thanks to 332 submarine cables, a number expected to reach 849 by 2017.

We in the West can claim to be part of the most well connected region, followed by that of the Middle East, which enjoys a strategic location between East and West. Despite our proud claim, however, we find that an economic powerhouse like Germany is linked to the United States by only two undersea cables and to Asia by only one. Totally dependent on landlines, Russia and Turkey are indirectly connected to the global submarine network by a single cable, whereas internet hub Brazil boasts an impressive 14 cable landing points.

Submarine cables are the superstructure of the internet, enabling physical links between, for instance, a flat in London and a shop in Sydney. All buildings with data cabling are digitally connected. Imagine a giant, waist deep in the ocean, grasping a great clump of submarine cables, pulling it out of the water, lifting it in the air and revealing millions of houses and other buildings dangling from the ends of the tangled strands.

The wire is what holds the modern human tribe together. Every device hooked up to that wire, from computer to mobile phone, is a token of our human family. Online, connected to the wire, we are within reach, albeit virtually, of well over three billion of the seven billion members of our tribe. 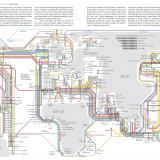