Street View
Google Street View is undeniably the best-known collector of public-space imagery. Competitors like City8 (China) and Daum (all of South Korea) offer nothing comparable to the coverage provided by Google.
After five years of cruising public space armed with 360° omnidirectional cameras, Google possesses a tremendous photo album of the Western world, as well as private data collected along the way.* Because most museums are considered public space, Google has been gathering photographic content from museums for its Google Art Project, which currently features images from 150 museums. Google Street View also covers parks, ski slopes and waterways, including parts of the Amazon River.
But peripheral areas are not the core interest of companies like Google. Photographs with the highest resolution are shot in cities, where you will find nearly 100 per cent coverage. Street View is primarily a system of city maps of the Western world – areas whose residents have maximum spending capability and relatively high income levels.
After 3,500 years of city mapping, we have arrived at a point of zero abstraction, at a point where a true representation of the earth appears on our monitors and is updated continuously, quickly and with ever-sharper images. Google Street View, the most advanced level of city representation, makes it possible to dive into the map and even become part of it. Eventually, the map will become the entrance gate to the online world. It already lends access to websites and, in the case of museums, to entire buildings and exhibitions. Through the map, real space will ultimately merge with virtual space. The map of real space will guide us through the World Wide Web while the virtual map guides us through the real world. Holding the key is the owner of the map, who possesses the access code to both worlds. 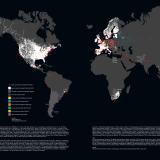