State of The Union

In his State of the Union address, held before both houses of Congress, the president of the United States of America takes the opportunity to review his achievements up to the present and to put forward the goals of the government in the coming period. Usually this speech is held at the beginning of the January meeting period of the legislature.
Comparing the State of the Union addresses given by the three presidents Ronald Reagan (1984), Bill Clinton (1994) and G.W. Bush (2004), one recognizes a trend that differentiates the United States from other nations, a trend that diverges from the ongoing discussions about the dissolution of nation-states. Since the end of the Cold War, friends and enemies are not bound together in blocs anymore; instead, they are identified individually, and, as at the Last Judgment, good work is blessed and missteps are censured draconically.
This "either-you-are-with-us-or-against-us" policy of George W. Bush seems to be a strategy to reorganize the diffuse cloud of nations that appeared after the fall of the Iron Curtain. Slowly emerging long before 9/11, the tendency becomes institutionalized by George W. Bush's administration.
With the emergence of a foreign policy that favours unilateral world leadership, the State of the Union becomes increasingly a State of the Planet. With every year's address, dreams and decisions of the president of the United States restrict themselves less within domestic boundaries and get broadcasted more roundly to the world community. 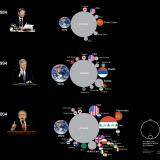 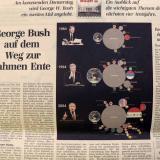