City squares often achieve name and fame through the protests and revolts that happen there, a phenomenon as true today as it was in the past. Tripoli’s rebels changed the name of Green Square to Martyrs’ Square, in honour of those who lost their lives in the fight against Gaddafi. Kiev’s Maidan Nezalezhnosti (Independence Square) will remain Euromaidan (Euro Square) in the minds of people worldwide who viewed or read about the pro-EU integration protests that filled the site in November 2013. New York City’s Zuccotti Park will be known forever as the birthplace of the Occupy Wall Street movement.
The still fairly young 21st century is reeling from an unprecedented series of uprisings. Since the beginning of the century, the ex-Soviet countries of Europe and Asia have been shaken by so-called ‘colour revolutions’ against corrupt post-Soviet leadership. Arab nations are still caught in the web of Arab Spring, which began in December 2010. The Western world has been experiencing its most widespread protest – the Indignados/Occupy Movement – since 2011. Though media coverage is waning, all three are still ongoing and alive.
Despite the differences among these movements, a common thread is their culmination in a public square, which becomes the proverbial ‘centre stage’ for collective action, while surrounding streets are largely avoided. Demonstrations, which used to be marches through the city to proclaim protestors’ grievances or causes, have turned into operative strategies of space occupation. The desired permanence of such protests through the erection of fixed encampments aims to celebrate and institutionalize the use of public squares as sites of civic dissent.
The aforementioned movements chose their squares wisely, close to political power structures in order to ‘reduce the gap between ruler and ruled, have and have not, rich and poor. Sometimes the simultaneous enactment of citizenship in both center and peripheral urban spaces is all that is needed to call attention to these gaps at the level of the city, and to set the engines of change in motion.’1
The digital square provided by social-media platforms works hand in hand with the physical urban space. Even if the influence of the digital realm was overrated in the case of the Arab Spring, the sheer presence and lingering power of social-media platforms generated extra leverage for use against oppressors. As a mobilization device, the relatively new mobile phone lives up to its name as well.
The Arab Spring – and certainly the Indignados/Occupy Movement – is but a preview of widespread global rebellions to come, and recent protests in the Ukraine underline this force on a more regional scale. At the climax of these massive simultaneous gatherings on public squares all around the world, a ‘global society’ comes into the picture. If it is not peace and happiness that brings people together, then it is anger against injustice and corruption. 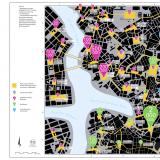