skype – where the poor pay more

Skype was founded in 2003 by Niklas Zennström and Janus Friis. Skype is available in 28 languages and is used in almost every country around the world counting 250 million account holders. Skype allows users to make telephone calls from their computer to other Skype users free of charge, or to landlines and cell phones for a fee. These calls outside of the internet are called SkypeOut calls with different SkypeOut rates per country and in some cases even per city. What is remarkable of this rates is that the entire western world, already including China (and Estonia, because one of the founders is Estonian) is calling for € 0,02 per minute while the poorer inhabitants of the globe are paying up to almost 70 times more. For example to call East Timor (or call within the country), one has to pay € 1,345 per minute.
Skype is not particularly bad, yet its call fees are representative for how the world’s economy of today is operating. We in the west are the stars that are invited to every party and don’t have to pay for anything, while the poor have to pay the bill. 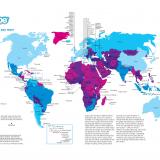