Of the worldwide 33 million people that are currently uprooted from their homes, 12 million are refugees and asylum seekers living in camps in countries other than their own.
Sudden crises like the most recent one in the Sudanese region of Darfur where more than 5.3 million people left their homes in an attempt to escape the genocide by the government-backed militia bring huge masses on the move.
Refugee camps are made for short time stay, enormous camp grounds for sometimes more than 100.000 people. Some refugee camps are older and more populated than for example Lelystad and Almere. While the population of Almere and Lelystad is pushed to identify with their new cities, in refugee camps its exactly the opposite, built on foreign ground, in a foreign country and mostly disconnected from any infrastructure its inhabitants can’t wait to leave and return to their homeland.
Producer: Theo Deutinger, Katja Schneider 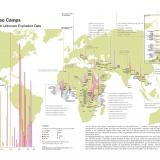