The political formalization of our planet’s surface into territories through the nation building process assigned every human to a specific territory. This organized the world nicely and granted the people within the territories with specific rights. Yet every year millions of people are forced out of their assigned territory by catastrophes, famine or war, fleeing into foreign territories where these people find themselves as refugees – in 25% of the cases (about 8,1m people) massed up in camps.

Refugee camps are instant cities, which have to be rapidly built in a state of emergency. In July 2012 Zataari (Jordan) first opened, three years later it is one of world’s largest refugee camp, counting 150.000 inhabitants and if acknowledged it would be the host countries fifth largest city. In order to cope with these extreme situations the United Nations High Commissioner for Refugees (UNHCR) published its ‘Handbook for Emergencies’ with eleven pages on planning strategies for refugee camps. The handbook is an attempt to organize an unpredictable situation. For example the sentence (page 239) “As it is difficult to predict the life-span of a refugee camp, it is best to plan on a cost-effective, long-term basis.” is contradicted by most host countries demands that no house or fixed structure is allowed to be built in order to prevent the camp from turning into a city. This results in tent structures that have to be replaced twice a year.

Thus refugee camps become an arena of political struggle where by the use of planning instruments life is suspended, sometimes for years. Self-settled camps (B1-B5) tend to stick to existing human settlements in order to use its infrastructure while planned camps are positioned in far distance from cities to avoid conflicts, allow easier expansion of camp perimeter and most importantly ease supervision over refugees. Following the instructions of UNHCR, to avoid camps bigger than 20.000 inhabitants, multiple camps (A1 & A4) are built together to create clusters. The internal zoning of planned camps follows safety regulations that reflect dual position of refugee both as victim and possible threat for each other. Peacekeepers quarters and service buildings are located at the periphery to allow easier connection with external world but also to secure the camp. Ethnic groups are divided into different parts of the camp to decrease possible conflicts.

As anthropologist Pierre Bourdieu has once noticed, there is a great similarity between the structure of camps and suburban typologies; but refugee camps are cities without a future. It’s all there: people, structures, schools, markets and shops but it is all designed to be gone. 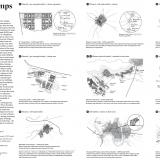