The tsunami of privatization in the 90’s and 00’s did not leave the fresh water supply sector untouched. In this sector people talk about the ‘Blue Gold’ and call it the top monetary investment of the future which makes people immediately suspicious about the integrity of these companies that serve human’s primary source for survival.
Currently the market is dominated by the two major companies Suez and Veolia that together own about 50% of world’s privately served waters. In some countries more than half of the fresh water supply is in private hands; e.g. Spain - 60%. The culture of multinationals is that they are much closer to their shareholders than to the clients they serve, which results in high price fluctuations and cost increase at water shortages. These for market economist logical mechanisms are hard to apply to water supply.
Nevertheless there was once hope that private companies could serve water to the cities of the developing world, through providing knowledge and structure. This almost alchemistic experiment of making water through privatization did obviously fail. Where there is no money, no money can be made - not even out of water. Since a few years the private water suppliers withdraw from difficult markets, and concentrate on cities in secure or growing economies. Yet the turmoil remains and spreads from the south to the heart of the private supplier’s home market. The latest and by far most spectacular de-privatization news is the withdrawal of Paris, the host city to the headquarters of Suez as well as Veolia, from private water supply by the end of the year 2009. 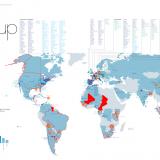