During the age of discovery, the sight of new islands raised explorers’ hopes for more uncharted landmasses, populated by strange people, plants and animals. In those days islands became destinations of dreams – of new worlds. It seems only logical that Thomas More’s fictional Utopia – a perfect society – was on an island. Islands today do not promise the unknown, but many do guarantee solitude. No neighbours, no other people at all.

Starting at a mere €37,000 (about the cost of a parking spot in Amsterdam), an idyllic island paradise is affordable to many. But owning an island requires commitment. For example, a desalination system costs up to €45,000, and gardens and houses need regular maintenance. Logistics are important too: how will you get there and leave again? Owning an island can be fantastic, but it’s vital to have a quick and easy way to go back and forth between your natural refuge and your New York penthouse or Los Angeles villa. Otherwise, an island can turn into a prison – as experienced by Abdullah Öcalan, head of the Kurdistan Workers’ Party (PKK), who is currently confined on İmralı Island, or by Nelson Mandela, who was detained on Robben Island for 27 years.

The promise of the mysterious unknown has shifted from desert islands to outer space. Planets are today’s islands and spaceships the new sailing boats. Planets hold our dreams of starting
from scratch and building a perfect society. Earthbound islands left behind as utopian fallout are no longer seen as places for initiating such settlements but as places from which to escape. 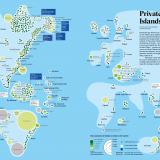