On Hold, Hold On

‘On hold’ is probably the most heard phrase in the past several months in architecture offices around the world. What might sound at first as a slight delay has had an effect similar to stepping on an active garden hose: either the stoppage is brief and the project jumps into realization, or the hose bursts – end of project.

According to Emporis and Skyscraperpage, two major high-rise building survey websites, there are currently 198 skyscrapers (>100m) ‘on hold’, amounting to 10% (Skyscraperpage) or 11 % (Emporis) of the skyscraper projects around the world. Among the skyscrapers on hold are superlatives like the Nakheel Tower (1.050m), the most promising aspirant for the label ‘world’s next tallest building’, as well as contenders in Europe, North America, South America and Africa.

In total there are 42,1 km of high-rise buildings on hold, with Asia home to more than one third (16,1 km) of the accumulated height. The impact on employment is severe. For example, delay of South America's proposed tallest buillding, Gran Torre Costanera (300m), has resulted in 2.000 jobs on hold, according to local unions. Extrapolating this meters-to-jobs ratio to all 198 skyscraper projects on hold, the niche product ‘skyscraper’ would be good for about 280.000 job losses worldwide.

So please hold on, or get off the hose. 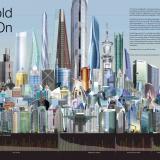