For the first time in human history, one half of the world’s population will be urban. The United Nations division of population predicted that sometime in the year 2006 this historical change will take place and the human race, which started out as collectors and hunters, will turn into an urban species. Humans retreat from the given nature and move into their own creation, the city. From ancient Rome, World’s first ‘million-city’ in 5 BC it took almost 1800 years till it got with London and Beijing some successors at a time when industrialization gave the ultimate start signal for rapid urbanization. Today well served and perfectly organized city agglomerations in Europe reached the point of saturation and are loosing out on urban population (e.g. Vienna -55.000 inh./year) while the most underdeveloped and congested South Asian and African cities still experience a demographic explosion. 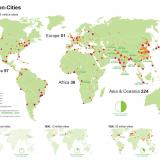