Just as there is no skyscraper without a lift, there is no metropolis without a metro system. Thus the birth of the metro in London on 9 January 1863 marked the birth of the British metropolis as well. Today, metros with more than 10,000 km of operational length are carrying passengers in as many as 150 cities, and another 40 cities are set to join the ‘Club of Metropolises’ within the next five years.

Currently, Seoul has the world’s longest metro network, and it’s still expanding. Beijing and Shanghai are close on the heels of the South Korean capital. Over 1,800 km of metro lines, equaling five times the length of the entire London Underground, are currently under construction; 81 per cent of them will be realized in Asia.

Metro lines are expensive, and their cost is rising along with the hourly wages of construction workers. The major metro systems of Europe and North America were established in circumstances similar to those of today’s Asia: high urbanization rates combined with low wages. To get their systems finished on schedule, cities in developing economies need to take advantage of the small window of opportunity open to them now, and to do so as quickly as possible. 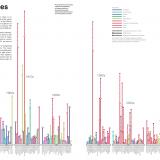