Thirty years ago, large-scale shopping malls were a strictly American phenomenon. It wasn’t until the early 1990s that the development shifted to Asia, with the Philippines taking the lead, while the 2000s can be defined as ‘the decade of the Chinese mega mall’. Currently, it looks as though the desire for huge retail complexes has moved to the Middle East.
Consumerism has hit Asia hard. Despite the poverty in this part of the world, mega malls – clean and, even more important, cool destinations – attract enough people to justify enormous investments, at least in terms of financial profit. In mall-saturated cities like Jakarta and vastly growing marketplaces like Istanbul, however, resistance to the development of shopping malls is on the rise. Jakarta’s city council is reconsidering new projects, as so many of its existing malls occupy former parkland. Green Map Jakarta shows a decrease in the city’s green areas from 35 per cent in 1985 to only 6 per cent today. On 28 May 2013, protesters in Istanbul launched a campaign against plans for replacing Taksim Gezi Park with a shopping mall. As of 10 September, these actions had cost the lives of seven people, primarily through police brutality.
But even the economic justification of mega malls is beginning to crumble. The mall boom in China, which has been going on for years and seems destined to continue – no less than half the world’s 32 million m² of malls now under construction is in China, according to CBRE Group – has resulted in such a high vacancy rate that many malls have resorted to paying brands like H&M and Zara to move in. And no matter how fast China’s middle class grows, the population of Chengdu, for example, cannot sustain four times as many malls as Los Angeles, a city of a similar size.
Most experts who are analysing China’s present retail situation see a bubble that is about to burst. Plans for mega malls are already slowing down, and the world’s largest shopping complex, the New South China Mall, is virtually unoccupied at the time of writing – and hasn’t topped out since its completion eight years ago. Meanwhile, the emergence of the hype in the Middle East can be seen in temples of consumerism not only in the Emirates but also, surprisingly, in the cities of Iran. 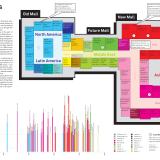