Out of all Fast food chains in the World, McDonalds is not only its synonym but also by far the largest, most successful and most criticised. McDonalds was founded 15th may 1940 in San Bernardino, California by Ray Kroc. Today McDonald's operates over 31,000 restaurants in more than 119 countries on six continents, employing more than 1.5 million people. Every day McDonald's serves more than 47 million customers around the world.
Though its principle is to serve its clients all over the world with the same menu, some exceptions are made for dishes that are based on local specialties for which there is a great demand, and which can be integrated into the company's product line.
In predominantly Muslim countries like Malaysia, pork is not served due to Muslim dietary laws and is replaced by beef. In India, the fact that Hinduism forbids the eating of beef, and Islam forbids pork, prompted McDonald's initially to use lamb instead; it later switched to chicken. 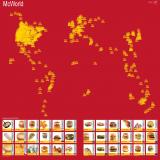