The decline of cities is of all times. However it is of utmost significance when this decline goes hand in hand with the decline of an entire civilization. Their disappearance remains sometimes a mystery, very often it is a result of war but also climate changes and natural disasters are causes. Catastrophes like tsunamis (Poompuhar), earthquakes (Helike, Petra) or a volcano eruption as in the case of Pompeii crush cities at once but barely have an impact on the empire itself. Yet long term climate changes do threaten cities and empires alike as for example the effect of a super El Niño between 536 to 594 in South America that resulted in 30 years of intense rain and flooding followed by 30 years of drought, which allegedly caused the end of the Moche civilization. Some 200 years later the Maya Empire apparently collapsed because of a chronic food and water shortage, due to a combination of natural drought and deforestation by humans.
The decrease in the loss of cities and empires through natural cause in the past decennia’s might be a result of an increased technological progress that resulted in a high degree of independence from local crop yields, an independence that is currently in huge doubt in the light of possible threats through a global climate change. 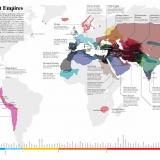