As part of Superstudio's Anti-Design Campaign, the Quaderna table formed a striking contrast to the pop design of the late 1960s, opposing all its curvy, colourful forms. Superstudio was convinced that there can be no renovation of design until ‘structural changes have occurred in society’, as Peter Lang and William Menking wrote in Superstudio – Life Without Objects. Thus they developed a matrix to generate objects for a new rational, social and cultural order.

‘The investigation into the essence of the object started in 1969, when Superstudio launched their Istogrammi project,’ Sander Woertman wrote in Exit Utopia – Architectural Provocations 1956-76. ‘The starting point was a square, the surface of a plane consisting of a regular rectangular grid. What Superstudio intended with this quickly became clear: the diagram could easily be translated into a furniture item, architecture or a landscape. A definitive solution for any kind of space or form had been found.’

The Quaderna, a table presented 37 years ago as a utopian statement against design, rebounded a little more than a decade later, becoming the ultimate design icon. Superstudio unconsciously wrote the lyrics for a world-hit and IKEA made it play.

One could say Lack is the ultimate global compromise, the table of all tables. If the United Nations had an assembly to decide what a world table – representing all the cultures and nations on earth – should look like, Lack would be the outcome. It’s square – avoiding the discussions of which culture invented the wheel; it’s average in height – right between the Asian and Western dimensions; it’s endlessly extendable – seating anywhere from one person to all the people in the world.

Lack avoids any reference to any particular culture; it is the common denominator of all tables of all cultures. It is the ultimate success story of the international style, or better: intercultural style, the style of the global middle class. Lack started a world tour and when it’s done, Lack will have globally reformatted the notion of the table. In the end there will be only one table left: Lack.

Lack is unavoidable; it is neither good nor bad, neither ugly nor beautiful and most important of all, it is cheap.

By omitting the Quaderna quadrangles, the table was released from its theoretical burden, it was liberated from the last evidence of culture that Superstudio ‘forgot’ to remove. By doing this, IKEA managed to turn the whole theory of Anti-Design inside out and baptised it, ironically, Lack. 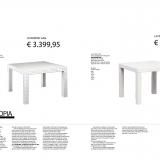