The Kyoto protocol knows 147 countries as parties. 34 out of these nations are “Annex 1” countries which mean that they, by ratifying the protocol, are legally bound to meet quantitative targets for limiting their greenhouse gas emissions. Only three out of this group did not sign: the United States, Australia and Monaco.

The fact that the US, worlds largest CO2 producer and responsible of 36% of the CO2 emission of the Annex1 countries, did not ratify, delayed the activation of the Kyoto protocol for years. Finally the ratification by Russia on November 18, 2004 satisfied the 55 percent CO2 emission clause and brings the treaty into force on February 16, 2005.

Two reasons led the US conclude that the Kyoto protocol should not be signed:
Reason one is that developing countries, and specifically China, world’s second largest CO2 polluter, are not accounted for binding targets on emission reduction. China emits 2,890 million metric tons of CO2 per year (2.3 tons per capita). This compares to 5,410 million from the USA (20.1 tons per capita), and 3,170 million from the EU (8.5 tons per capita). Yet China has ratified the Kyoto Protocol, and is expected to become an Annex I country within the next decade and has through initiating energy efficiency programs reduced its carbon dioxide emissions by 17 percent since 1997.
Since all major CO2 polluters are parties of the Kyoto protocol and if not already will join the emission reduction targets soon, the second reason of the US is more likely to be the most important; that being bound to the Kyoto protocol "would result in serious harm to the economy of the United States". 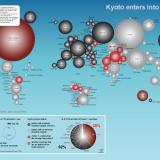