Since the 100 mostly used words in the Quran and the Bible are almost identical, this comparison of the two books is not made to highlight the extreme difference between the two religions but rather shows the slightly different focus points within their extreme similarities. What strikes the most is that the Bible seems to be a much more political book than the Quran. It is highlighting specific places like Israel and Jerusalem, focuses on the house as space to life in, representing the king as ruler and the hand as a tool. While the Quran is referring to the world and earth in general as space, mentioning people almost equally often as man and the heart as most important body part. Nevertheless in either publications are Lord, God or Allah hugely over presented while women are barely mentioned. 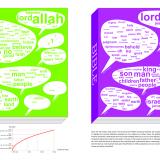