With China on the rise and Europe standing strong, Eurasia is rapidly becoming the world’s new economic centre. Clogged seaports and a vulnerable air-transport system have shifted the focus to a network of railways – also known as the Iron Silk Road – intended to shrink today’s supercontinent in the coming years. The project is aimed at shortening the time of bulk consumer-goods transport between China and Europe and, at the same time, unlock the cities at the heart of Eurasia. Thanks to their strategic position, creating better access to these cities will greatly facilitate the ability of their inhabitants to travel and do business throughout the vast area served by the new network.
The Northern Corridor of the Iron Silk Road largely follows the existing Trans-Siberian Railway, while the Central Corridor mainly traces the route of the ancient Silk Road to Beijing. The Southern Corridor faces political barriers but will eventually connect the highly populated countries of Turkey, Iran, Pakistan and India with Europe and China. Pressing ahead enthusiastically with the Iron Silk Road project, China is not only establishing a high speed train network inside the country but also planning and building railways along the routes as far as Turkey (a contractual agreement was signed at the end of 2010), an operation that will turn Turkey into Europe’s gatekeeper.
The Iron Silk Road will interlink about 75 per cent of the world’s population in more than 40 countries in Asia and Europe. China hopes to complete its massive infrastructure project within ten years. It will include at least one line running 320 km/hour and will shorten land-transport time between London and Beijing from 15 to only two days – if Europe is willing to connect, that is. 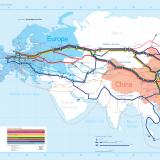