Throughout history, the borders of Europe have constantly changed. Unfortunately, shifting borders are usually the outcome of conflict, as exemplified by the dissolution of Yugoslavia. Yet armed conflict is avoidable, as shown by the emergence of the post-Soviet states and the peaceful divorce of Czechoslovakia in 1993. Just a year ago, one might have thought that a more mature world was evolving – one in which the pursuit of sovereignty could be settled without gunfire – but in light of the war in Ukraine and ISIL’s desire for an Islamic caliphate, global sanity seems more unachievable than ever.

The concept of nation-state sovereignty began with the Peace of Westphalia in 1648 and is based on territoriality and the absence of a role for external agents in domestic structures. In 1648 the world consisted of some 80 sovereign states, a number that had declined to about 70 at the end of the 19th century, when it began to grow again. Today’s world comprises 206 sovereign states.

Together with the rise of the modern state, the accuracy of national boundaries increased as well, thanks to modern surveying techniques (triangulation) and the consequent production of highly detailed maps. Precisely drawn borders have not led to greater stability, however, but to even more sensitivity among nations. A study of the number and size of nation states concludes that one result of democratization and economic integration is ever more countries.[1] As Marshall McLuhan points out in The Gutenberg Galaxy, literacy is another determining factor, as most states that have formed over the past 150 years have appeared along language lines, and people who can read and write are aware of the cultural impact of word-based communication.[2]

The collapse of hegemonic empires has also served as midwife at the birth of nation states. The end of the Roman Empire marked an increase in the number of European states, which had risen from 37 to 114 by 1300, a development comparable to the proliferation of sovereign states in East-Central Europe since the fall of the Communist regime.[3] The process of autonomy has slowed down but not halted; in Western Europe it is fed by subsidies from the European Union, and in Eastern Europe it is triggered by Russia’s autocratic government. Both systems have an expiration date and should be prepared for a higher diversity of sovereign states. It is to be hoped that, at the very least, the nations of Western Europe understand the concept of a peaceful divorce and the need to respect another’s point of view. 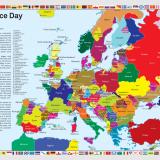