Independence Day 2019 is an update from our 2014 version of Independence Day which shows the political landscape of Europe if all its current separatist movements succeed. As stated with the original map, all currently existing movements that have a flag and express their wish for independence in any way, are shown.

The 2019 update has been made possible due to the many reactions posted on online forums. Here are some of the remarks that helped us: +++ Btw, the Venetian flag disposed here is a little wrong: because here they've placed the Italian's regional flag of Veneto instead the flag of millenary Venetian Republic... +++ That's the real Alsatian Flag : fr.wikipedia.org/wiki/Drapeau_… +++ I miss Extremadura and, perhaps, Navarra independent of Euskadi. Have you found other possible errors? +++

Throughout history the borders of Europe constantly changed. Unfortunately, most of these changes have been reasons for and eventually resulted in conflicts, as for example the dissolution of Yugoslavia. Yet armed conflicts are avoidable as proven by the emergence of the post-Soviet states, or the peaceful divorce of Czechoslovakia in 1993.

The concept of nation-state sovereignty began with the Peace of Westphalia in 1648 and is based on territoriality and the absence of a role for external agents in domestic structures. At this time the world comprised around 80 sovereign states, a number that declined till the end of the 19th century to around 70 and rose sharply in the last 100 years to today’s 203 sovereign states.

Together with the rise of the modern state the accuracy of the territory increased due to modern surveying techniques (triangulation) and the production of high definition maps. Yet the higher precision in drawing the border line between two territories did not lead to a more stability but only to a higher degree of sensitivity. A study that investigates the number and size of nation states concludes that democratization and more economic integration results in more countries. As Marshall McLuhan points out in his Guttenberg Galaxy, one can add literacy to this list since most of the state forming in the past 150 years appeared along language lines and prominently the literate are aware of the cultural impact of their talk.

The collapse of hegemonic Empires is another midwife for the birth of nation states. After the end of the Roman Empire the number of states in Europe increased from 37 to 114 in 1300, as the end of the communist regime led to a rapid increase of sovereign states right at the center of Europe. This process of atomization might still not be halted but only delayed. In Western Europe through subsidies from the European Union, in Eastern Europe through the autocratic regime of Russia. Both systems show signs of increasing inner pressure and should prepare for a higher diversity of sovereign states.

The European Union should stick to its official motto 'United in Diversity' and should be not afraid of a finer grain size within its member states. Today it seems that nationalism in Hungary, Poland and Austria are much more dangerous to the Union than an independent Scotland or Flanders would be.  The European Union will prove its ability to keep Europe at peace and show the way out of the nationalistic trap. 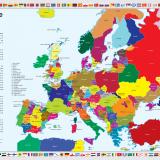