IKEA is a multinational empire that penetrates with a wide range of products from Alesund till Zorg (IKEA-language) the last corners of the countries it "conquered". Like the British Empire introduced its political system and its laws in all colonies in order to get control of governance, IKEA does the similar in its fight against global tastelessness in design and for higher profits. Where on earth IKEA appears the world turns blue and yellow and the start of the New Year shifts from 1st January to 1st of August, celebrating the release of the new IKEA catalogue, the only print medium with a larger circulation than the bible. IKEA is an empire that is very hard to resist, if one gets used to the power and convenience of its design it is hard to imagine a life before IKEA. 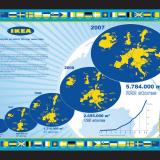