Since the introduction of the steam locomotive in 1804, the acceleration of human speed has for a very long time been the prime focus of infrastructural developments. A major bifurcation occurred in the 1840s with the invention of the electrical telegraph, which disconnected the speed of the message from the speed of the body. Today, in times of real-time communication around the globe, any journey, even just to the next city, is a huge disappointment.

It might not feel like it, but since the retirement of the supersonic passenger jet Concorde in 2003 we even took a step back and slowed down. In the past 40 years almost all developments and inventions in the field of people-moving infrastructure have been made in the fun and convenience sector. Typical additions in the past years to the fun sector are the Segway, the Solowheel and the Hoverboard while in the convenience sector the e-bike and the passenger drone seem to be the most present but also questionable addition to the range of travel modes.

Since the introduction of the Tōkaidō Shinkansen on 1 October 1964 and the Boeing 747 on January 22 1970, no significant contribution to the acceleration of the people on the planet has been made. Cars already hit the 200km/h threshold in the late 1940s. Thus, while we might be baffled by the feeling that everything is going so fast, it is definitely not our bodies. Our travel speed plateaued almost 50 years ago and we have been in the same cruising mode ever since. 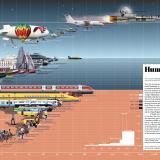