The grid was present in every pre-modern culture in the world, including the ancient Indus Valley civilization (2600 Indus Valley civilization (2600 Aztec and Mayan settlements of the Americas (100 BC). Throughout its 5,000 years of known existence, the grid has known existence, the grid has lost none of its attractiveness. The grid is so old that nobody can remember who invented it.

Chronologically speaking, its conception probably coincided conception probably coincided measuring time and drawing a grid both depend on dividing a whole into a multitude of a whole into a multitude of belongs to no one and thus can be freely used, copied and altered according to and altered according to question. The grid is not just an urban model; it is the only urban model, certainly if you consider the radial city a special version of the grid city. Every attempt to avoid the grid results in a ‘free form’: an arbitrary pattern that is no model at all.

Unfortunately, since the 1980s the urban grid has been consistently undermined by the ‘New Urbanism’ movement, which praises the virtues of traditional towns – usually based on a regular grid – and, at the same time, ﬁercely condemns the rectilinear grid. This is especially regrettable for rapidly developing countries like China, whose building boom coincided with the boom coincided with the Urbanism. Accordingly, the regular grid has been largely abandoned in China’s new towns, where orderly urban schemes have been replaced by ornamental urban master plans that look good on Google Earth but are a hell to live in.

As rigid as the grid model might seem, its versatility is endless. Grid sizes, proportions and repetitions have varied extremely throughout time, proving the grid’s longevity and ﬂexibility. An optimistic development, however, is the recent rediscovery of the grid’s qualities and relevance, following the visible exposure of disastrous results emerging from the anti-grid era. 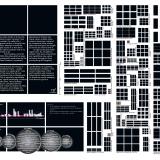