Google, the world’s largest search engine, has become the long envisioned global conscience. In the course of answering over 2,5 billion requests a day, Google provides a vision of community and identity: it tells us not only what is out there, but also who we are. To be “googleable,” to be recognized in its intricate database, is an honor. At the end of a lackluster day, Google provides the opportunity for tech-assisted self-adulation: googling one’s own name is a portal to “recognition,” seeing your name, underlined in Google’s own benign shade of blue is kind of like being a star – even if the connection is not in fact to you, but to another, identically named person.
At its best, Google provides the answer to the West’s much-celebrated anomie. In its seemingly boundless network of web sites, the weary googler can find what her or his immediate surrounding may not provide – empathy. Google catalogues our interests, obsessions, perversions with chilling efficiency and disorienting inconsistency.
Already an indispensable part of both pop culture and academic research, Google is now part of the global movement to, finally, make the Web the complex, multi-lingual space that it has promised to become. Currently, Google supports 117 languages and provides an interface catered to 157 countries. It is both an icon and agent of globalisation, McDonald's reduced to only the menu – uniform iconography, uniform layout, variable language. Still a symbol of the former, Silicon Valley Web era, Google has quietly prepared for a future when the current dominance of English is challenged by Hindi, Mandarin, and Zulu.
Producer: Theo Deutinger, 2007 update: Andreas Kofler 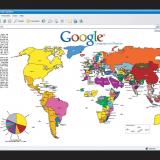