European architecture education was and still is based on Greek orders, a classical system of architecture comprising five types of columns: Doric, Ionic, Corinthian, Tuscan and Composite. As modernism came into being, European architects discovered what a narrow view of architecture history Western educators had had until then. The early modernists began to study and to appreciate the architectural legacy of other cultures. Their fascination with traditional Japanese homes and temples, for example, had a profound influence on their work, which was soon to incorporate many features of Japanese architecture.

More than a century later, architecture education still has a fairly local scope. Many schools remain unable or unwilling to draw from the immense richness of an architectural past that spans the Earth. One symbolic step towards a global view of architecture history might be to establish a world order represented by columns. In our study, we identified 60 types of columns that were designed and developed by civilizations worldwide. The column as load-bearing architectural element was known to almost every culture, and its division into base, shaft and capital – also found extensively – has made the column an important character of what can be called ‘a universal language of architecture’. Together, the 60 types identified could lay the foundation for a global theory of architecture, a theory that continues the search for similarities and common denominators, eventually leading to the development of a truly global style that celebrates the unity of the people on this planet. 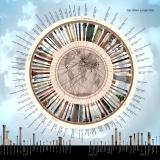