‘Garden of Modernity’ is a development strategy that focuses on the neglected modern heritage of the city of Marl, while proposing a re-activation of all modern buildings through a productive natural landscape.

In their current forgotten and overgrown state, the modern buildings of Marl strike through their romantic beauty. Images, only known from Angkor Wat or forgotten Maya temples. There is an intrinsic value in this aging process that, if treaded carefully, paths the way for a promising future.

Marl is an exquisite example of post war planning, it’s a splendid ensemble of modern architecture that represents the strong belief in a homogenous society bound by the desire for gaining knowledge, enjoying entertainment and recreation.

With the project ‘Garden of Modernity’ we want to advocate the importance of Marl’s uniqueness and the future development of this heritage.

TD presented ‘Garden of Modernity’ at the Grimme Institut in Marl (Germany) on the 30th June 2015. 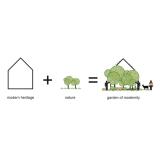 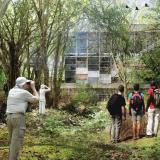 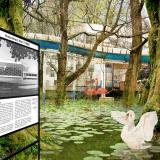 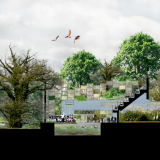