A flight information region (FIR) is a specified airspace within which an aircraft receives basic levels of air-traffic service, including information about weather and potentially conflicting traffic. The term 'flight information region' – the world's largest regular division of airspace – was formalized in the Chicago Con­vention*, which was signed on 7 December 1944. The document granted governments (referred to as 'states') the right to control their own airspace.

A large FIR translates not only into the control of considerable airspace but also into money, as carriers passing through a par­ticular FIR are required to pay for the privilege. Take the United States, for example, which charges overflight fees to operators of aircraft that fly in US-controlled airspace but neither take off nor land in the USA. Current fees are approximately $57/100 nauti­cal miles (€23/100 km) for overland flights and $22/100 nautical miles (€9/100 km) for oceanic flights. 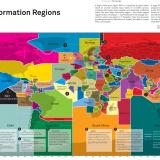