A new campus for Otaniemi

Urban Design Concept
The existing urban structure does at first sight not follow a specific direction. Every building got its freedom to be placed in a vast landscape being individually oriented according to the topography , view or sunlight. How to deal with such an urban anarchy?

It is exactly this anarchic, non-hierarchical layout which represents the core quality of Otaniemi Campus. Introducing a hierarchical system (like an axis to the main building) is not in the spirit of the Aalto master plan and even poses a threat to its unique merits. The best way to extend Otaniemi Campus and intensify the area in the long run is to acknowledge its freedom. In this way we can provide each building with the same individual rights but collectively create the space between them. The project never stops and new buildings can be placed over time in the same free spirit as the Otaniemi project was started.


Programming
The metro station is changing the non-centric character of Otaniemi Campus at once. Most of the people will be using the metro for daily transport and all paths to the station will be soon stamped out more than others. In addition, the banal economic formula: “the closer to the metro station, the more valuable the land”, will apply soon to Otaniemi. For these reasons we placed all commercial functions in and around the metro station so that they are where the people are. Thus all commercial program is situated along the walking route to and from the metro station and in the ground floor of the ARTS building.
Studying means learning and observing the everyday live. The combination of shops, cafes & restaurants, workshops and classrooms awakens curiosity and inspires. This unique combination lays the foundation to Aalto University as a forerunner in the holistic approach of learning. The programming is mirroring Aalto universities ambition and is not organized in separated volumes but in interacting layers. The commercial floors of the ARTS and LUME building are reaching out horizontally to all directions to tie new and existing institutions together. Above the central square of the commercial zone in the ARTS building, exactly at the interface of commercial and university, the learning center is positioned; learning at the supreme crossroad of theory and reality.

The Squares
Today learning is depending on exchange of personal knowledge and experience more than ever. The place where people discuss and enrich their knowledge becomes most relevant: the square.
As the specific social groups have different scale levels, the squares in the new Alto university building have as well. The guild rooms are designed as miniature squares for the four individual focus groups. These guild rooms are again connected to the central Work Floor which functions as Main Square for the entire ARTS building. Finally the Work Floor is directly connected to the University Square which works on his part as meeting place for the entire Otaniemi Campus.

ARTS - the Factory
The higher one climbs in this building the more private are its functions. Strolling through the shops and restaurants on ground floor one gets a hint that of the university from installations and exhibitions displayed along the passages and hanging from the ceiling. If one looks up to the mezzanine, people can be observed that discuss energetically with each other. Looking further up one even gets a glimpse of the Work Floor, the practical heart of the ARTS building.
High up under the waving roof researchers sit quietly working at their articles. As soon as they open their door they stand on a balcony overlooking the Work Floor, to which all rooms are orientated.
The Work Floor is the inner heart of the ARTS building as university square it is for the entire campus. The Work Floor is the exchange hub, the place where ideas get developed, knowledge gets exchanged and lectures are given.

LUME - the Wonderland
The roof of the LUMA building is designed as new landscape which is carried by its individual functions. Not a rational system defines the buildings structure but the freely arranged theatre, cinema, sauna and restaurant; it’s a mini version of the campus itself. The roof landscape of the LUMA building is a cosy place to retreat and disappear; a refuge from high learning pressure amd a cultural paradise. 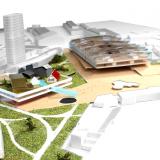 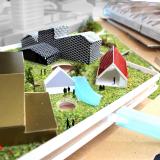 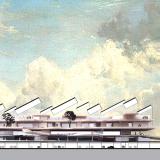 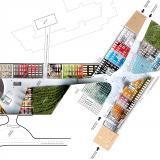