The 'EXPO – Exchange Potentials' declares a part of Mariahilf, the 6th district of Vienna, to an EXPO terrain. Existing shops, services and institutions present themselves as the economic and social glue Mariahilf’s. A map with an index together with three guided tours direct the visitors along the various participants. The intervention stimulates the exchanging, sharing, and trading of not only goods but also of information, care, and interest.

For nine days (16.-24.9.2022) the EXPO stages a “Grand Exhibition” following the tradition of World Expos.
In 1851 the first World Expo or "Great Exhibition of the Works of Industry of All Nations" was held in The Crystal Palace in London. A little more than 20 years later, a Weltausstellung was held in Vienna in 1873. These early world fairs have provided the start signal for the economic globalization that is experienced today in all cities around the globe.
Globalization ignited a battle of scales. Large multinational retailers like H&M and IKEA as well as franchise chains like McDonalds and Starbuck are still a direct threat to local small scale fashion stores, carpenters, and restaurants all around the world, thus also in the 6th district of Vienna.

It is time to rediscover the great power and resilience of local production, local services, and community. By creating a common emblem, way finding system and narrative this EXPO will bring the power of local actors to the foreground and make them visible.

Project by 'The Department' (Theo Deutinger, Barbara Krajcar, Christopher Clarkson and Pia Prantl) in the scope of Vienna Design Week. 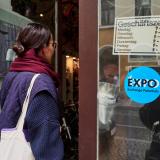 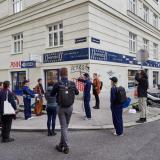 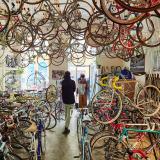 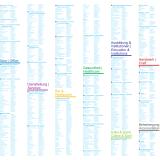 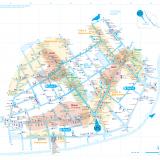