Regardless of how the economy is doing, natural resources are hot. Many of the easily accessible resources on the mainland are exhausted and more and more effort is being put into off-shore exploitation. Today, a country’s marine economic area is defined by its Exclusive Economic Zone (EEZ), a 200-nauticalmile-wide (370 km) strip of sea along the country’s national coast line. This regulation, which was installed by the ‘UN Convention on the Law of the Sea’ in 1982, grants a state special rights to exploit natural (such as oil) and marine (for instance fish) resources, including scientific research and energy production (wind-parks, for example).
Practically, this means that if a country owns a minuscule rock somewhere in the ocean, this rocks exploitable surface increases from almost zero on-shore to 430.000km² offshore. If EEZ’s overlap, it is up to the involved states to delineate the actual boundaries; a rule which led to decades of dispute in certain cases. Yet there is even more underwater land to claim and there are more squabbles ahead: the 200-nautical-mile definition got supplemented by a clause that allows the expansion of the EEZ to the edge of the continental shelf. The first deadline for so called ‘continental shelf submissions’ passed in May this year and land (seabed) allocation will start soon. If underwater land grabbing goes on like this the ‘Freedom of the Seas’ might soon be a thing of the past. 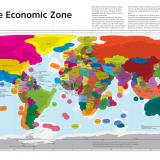