The UN-HABITAT report ‘State of World Cities 2008/09’ claims that the phenomenon of the so-called ‘Endless City’ could be one of the most significant challenges for the way people live and economies operate in the next 50 years. The biggest confrontations are not faced by the people who move to the cities voluntarily but by the ones that stay on the countryside and get caught and incorporated by the giant urban dough – the ‘Endless City’.

There is no master plan or ‘project’. The ‘Endless City’ is the stochastic result of a myriad of minds and originates by people from all cultures. Planning becomes only evident at connections points between systems: e.g. dissimilar track gauges have to be bridged. The more the ‘Endless City’ expands, the higher our awareness about the till now unaffected parts. The Amazon, the tundra and the polar caps as well as world’s deserts get our unbroken attention since they embody our pre-urban past. All planning attempts are reduced to damage control.
While the outskirts (developing world) see the ‘Endless City’ as a threat, the centers (developed world) see it as chance to streamline energy consumption, urban transport and cultural exchange. The principal author of the UN report, Eduardo López Moreno, states "that the world's largest 40 megalopolis cover a tiny fraction of the planets habitable surface with fewer than 18% of the world's population but account for 66% of all economic activity and about 85% of technological and scientific innovation" .

The Endless city is spanning the entire northern hemisphere and consists of four major city centers: the saturated urban core of Europe, the future center of ‘Endless City’, Asia I&II and the saturated core of America. The urban centers in the south remain geographically isolated from this urban ring in the north but have the future advantage of close proximity to unique natural resorts and resources. 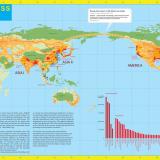