Currently the positive powers of the masses are praised and discussed extensively. Swarm-intelligence, crowd-funding, crowd-sourcing and crowd-innovation are some of the keywords that promise economic and social progress due to bundling of individual powers. Social media platforms make it easy to fuse individuals into masses, reinforced by frequent and cheap international transportation which mobilizes masses all around the world.

On the flipside, mass tourism is resulting in chaotic situations at major sights, the threat of terrorism at crowded urban spots puts pressure on urban security and mass urbanization combined with mass migration demands ever refined methods to manage and control streams of people.

Six people per square metre is the threshold at which bodies are jammed so tightly that they begin to behave like a fluid. Pressure waves can travel through them and they can lose control. Yet in most of the cases crowd control is not about avoiding a disaster through overcrowding but about avoiding disastrous media coverage. And police has to watch out since, through the use of smart phones, helmet cameras and even drones, participants of demonstrations monitor police continuously. Additionally, feeling safe is on top of the list for people choosing to visit and live at a specific place. Thus crowd control is not only important for the masses involved but much more for the masses not involved but potentially bothered by it.

All this results in an ever refined and sophisticated set of crowd control strategies by event organizers, tourist boards and especially police forces. The smallest signs of an unusual gathering rings alarm bells and even the smallest demonstrations (which anyway always need to be announced and permitted weeks beforehand) result in a massive police operation. Orchestrated handling and professional communication to the crowd, the public and the citizens is key. To restore confidence in safety, the public needs to be assured that everything is at any moment “under control” with the downside that this naturally includes each and every one of us. 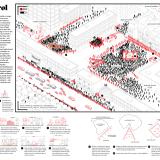