Communism is still alive. Although capitalism won a victory when the Berlin Wall went down, communism is triumphing as nation states continue to bail out banks in the wake of the recent economic crisis. Global capitalism is hugely unorganized and has no
interest in a comprehensive plan for the future of the world – and, if it did, it would not know how to go about achieving such a goal. Global communism, on the other hand, has a clear idea about the organization of the world but does not know how to maintain competition, preserve individual freedom and generate public enthusiasm. Each of these ideologies falls short of its potential. This seems to leave only two possibilities: the two must merge or must face extinction. Either way, the consequence will be an era without ideology. 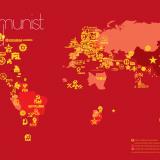