Contemporary warriors are retreating more and more from the battle field and exchange guns for computers like the one this article is written with. But unlike me, these warriors are sitting in maximum security installations like bunkers. Therefore, hitting a bunker is a military jackpot, eliminating drone pilots, cyber warriors and military command. These ever deeper and more reinforced bunker installations are designed by engineers and architects. Thickness and designs are measured against their biggest threat, the Bunker Busters.

A Bunker Buster is a bomb which is able to delay its explosion after it penetrated layers of earth or concrete with the help of a timer and a propeller. More advanced bombs detect the sound of impact and delay detonation until a specific number of floors in a structure have been penetrated. Although the first earth-penetrating weapons have been used in WWII by the British Army, the first real Bunker Busters appeared just in the early 1990s. During Operation Desert Storm (1991), a sudden need for a deep penetration bomb appeared. Within only 28 days the laser "Guided Bomb Unit-28 (GBU-28)" was developed. The bomb was unofficially nicknamed "The Saddamizer" referring to its initial purpose of bombing Saddam Hussein’s bunker.

Despite their high amount of collateral damage, Bunker Buster usage is in full swing. Currently the West is accusing Russia and the Syrian government to trop the Russian designed bunker buster KAB-1500L-Pr in Aleppo, while the Royal Air Force is using a GBU-50 EPII against Islamic State fighters in Iraq.

And the collateral damage is about to increase. In November 2015, a test of the B61-12 a nuclear Bunker Buster, was conducted by the US army. Being able to penetrate underground reduces its radioactive fallout risk, but lowers the threshold for their actual usage. The Bunker Buster is about to open the back door for the use of nuclear warheads by blurring the sharp line between conventional weapons and weapons of mass destruction.

The withdrawal of the armies from the planet’s surface into the air or underground leave civilians literally alone in the middle. The fact that cities are the contemporary battlegrounds seems to prove that the only wall that armies hesitated to break through is the human shield. 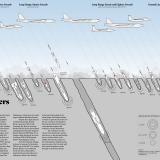