50 years ago the first artificial satellite Sputnik 1 was launched by the Soviet Union, inaugurating the rage to occupy outer space. Currently, the U.S. Strategic Command monitors 12.771 satellites and other large objects with about 10cm in diameter orbiting the earth. Out of these 12.771 objects only 872 are active satellites, while most of the remaining 11.899 monitored pieces are dysfunctional and considered ‘space debris’. Together with millions of other smaller pieces of debris generated by spacecraft explosions or by collisions between satellites, they form a rapidly growing dangerous nebula, causing a major threat for damage on satellites and spacecrafts. The power released by a 1cm piece of space debris is equivalent to a hand grenade. While our lives on earth depend more and more on GPS satellite support, the space they are imbedded in becomes more and more threatened. As an American General puts it “…our space architecture is very fragile.”
Producer: Theo Deutinger 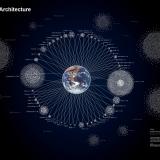