Low-cost airlines have revolutionized the air travel industry. In twenty years time air travel has become twenty times cheaper. More than hundred low-cost airlines are serving thousands of destinations worldwide. Traveling is no longer preserved for wealthy pleasure seekers and business travelers alone, but has become within reach of 20% of the world population, that is about one and a half billion people. The destinations on the periphery of the low-cost networks are the new frontiers of our capitalist society.
The concept of the low-cost airline was invented in 1971 by the Americans King and Kelleher. At that time their Southwest Airlines already offered “flights without frills for bottom prices”. In Europe, years later, Ryan Air adopted this idea, modernized it and made it even more successful. Together with EasyJet Ryan Air stood at the birth of the explosive growth of low-cost airlines in Europe, a growth caused by the coinciding of the liberalization of the European air market in 1997 and the internet boom that simplified sales and marketing through the internet. Today the airplane has become cheaper and more popular than the train.
The low-cost airlines are at the wedge of conquering Asia, with its billion population and rising middle class an enormous potential. Airplanes with prints of tigers and exotic flowers and names as FlyMe, Magic Air and WOW Asia have to seduce the traveler to ‘spicy hot deals’ en ‘smarter ways’, with ‘fares so low, you just have to go.’ 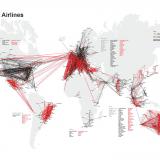