The investigation into the relationship between the size of a country and its prosperity shows that extreme dimensions are an advantage.

By reorganizing the countries of the world according to their physical size, an interesting phenomenon emerges that shows prosperity at the edges and meagerness in the middle of the scale. The segment of the super-sized countries is dominated by Canada, USA and Australia with the vastly developing BRIC-Countries (Brazil, Russia, India and China) joining in while the zone of XXS-States is dominated by countries like Luxembourg as world’s richest country and tax-havens like the Cayman Islands.
Seen in this light the European Union established itself as a perfect androgynous state that, at its will, is able to bridge this gap and appear wherever it is most suitable. Its member states can either appear as toothless dwarfs or, if the members are working together, the European Union can appear as important player amidst of world’s largest and powerful countries.
Producer: Theo Deutinger, Theresia Kohlmayr 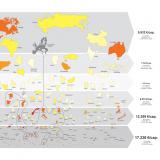