In 1519, only three months before Ferdinand Magellan’s fleet left the harbour of Seville in order to circumvent the earth, Leonardo da Vinci, world’s most prominent polymath died. The start shot of globalization - the birth cry of the expert, coincided with the end of the Homo Universalis. Ignited by the Copernican Revolution which made aware that not earth was mastering the universe but that the universe was mastering earth, humankind had to change position and leave the centre. The only way to regain a central position was through making alliances and being part of larger constellations.

Ever since this shift in perspective, the architectural design process became increasingly diversified. Every technical invention and historic event triggered the rise of a new expert. Archeological excavations, high-tech building materials, architecture exhibitions and a growing need for the selling of projects increased the scope of our profession and generated the need for another specific expertise. The more globalized our culture becomes the farther we move away from the polymath, the more specialized we have to be. While never before we lived in a time with so many individual freedoms, never before in history we have been so much dependent on the expertise of others. If knowledge is not within a single brain the exchange of knowledge is crucial. The more specialized we get the more hours we will spend in meeting-rooms, on the phone or video conferences.
What was once going on in a single human brain gets reconstructed on much larger scale creating a pattern of thinking as a collective construct. Humans as experts are set in place of neurons, while meetings, magazines and electronic networks function as neurotransmitters which enable the interaction between these experts (neurons).

Altogether we developed a ‘planning machine’ which still gets more and more ramified, streamlined and with the help of the internet comes even close to the speed of thinking. This ‘planning machine’ is able to master building assignments in unprecedented scale and speed for a rapidly growing world population. The global concrete consumption of the year 2009 equates to 33.000 skyscrapers with the size of ‘Burj Dubai’ (the world’s tallest building) or five New York cities. The larger the assignment, the more the system splinters and the stronger the need for communication and exchange of knowledge up to the point when we all together will think like one polymath brain – the whole world thinking as one giant genius.

In collaboration with: Jeroen Zuidgeest 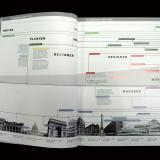 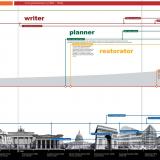